Because it's hard to read on an empty stomach. 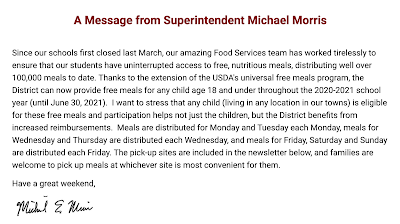 Posting it larger here. Because this is important:

"Since our schools first closed last March, our amazing Food Services team has worked tirelessly to ensure that our students have uninterrupted access to free, nutritious meals, distributing well over 100,000 meals to date. Thanks to the extension of the USDA's universal free meals program, the District can now provide free meals for any child age 18 and under throughout the 2020-2021 school year (until June 30, 2021).  I want to stress that any child (living in any location in our towns) is eligible for these free meals and participation helps not just the children, but the District benefits from increased reimbursements.  Meals are distributed for Monday and Tuesday each Monday, meals for Wednesday and Thursday are distributed each Wednesday, and meals for Friday, Saturday and Sunday are distributed each Friday. The pick-up sites are included in the newsletter below, and families are welcome to pick up meals at whichever site is most convenient for them."

Chandamama, a children’s magazine, was published for 60 years in 13 languages in the Indian state of Tamil Nadu. More than 70 million people speak Tamil, making it even more widespread than Italian, but many popular international comics were not being translated. 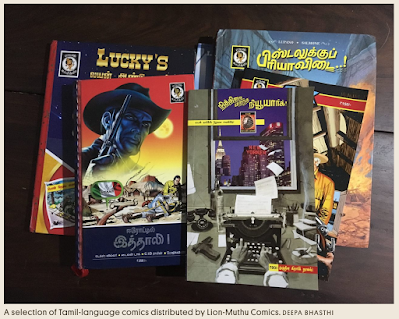 M. Soundrapandian changed all that.

How well do you know your forms of government? 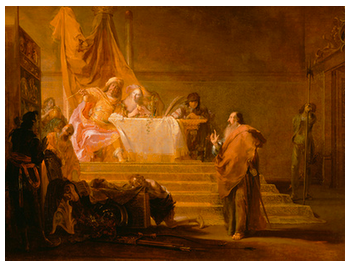 Take this quick Merriam Webster quiz to find out.

And if you find yourself needing to brush up on the American system, check out any of these books by Amherst author Joseph Ellis!
Posted by Lucy at 11:16 AM

BOO! To celebrate the spookiest season, the New York Times has made a list of the scariest novel set in every state. 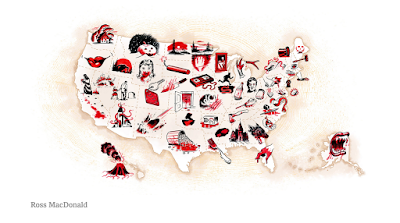 Want to read the one for Massachusetts? The Jones has it.

by Austin Sarat and Sharon Sharry

On October 15, the Jones Library Board of Trustees unanimously voted to approve the library’s renovation and expansion plan. The Board also voted to request that the Amherst Town Council approve the plan by the end of April. Those votes were the culmination of more than a decade of careful planning, extensive deliberation and consultation, and continuing commitment to making sure that Amherst’s libraries serve the needs of all its residents.

They point us toward a bright future in which the Jones will continue to nurture democratic values and a vibrant and inclusive culture in our town.

But some might ask, why move forward with the plan now? And why ask for a vote in April?

As to the first question, the Trustees have completed all the work needed to move the plan to fruition. It is now ready for consideration by the people of Amherst and their elected representatives.

Our planning began when the Board of Trustees launched a long-range planning process. As part of that process, we surveyed library patrons and the public. We held focus group sessions and talked with the staff about the library’s needs as well as their own hopes and aspirations.

Those data collection efforts and conversations revealed that, while the Jones was functioning well in many ways, it also had some serious problems and pressing needs. High on that list was the physical condition of the building itself.

Because we wanted to make a great library even better and sustain its greatness into the future, we asked the library director and staff to develop a proposal for improvements, which they did with their usual skill and acumen. That proposal, among other things, called for expanding the children’s room, providing a much-needed teen space, dealing with the inadequacies of our Special Collection and English as a Second Language facilities, and making the building accessible not just for those protected by law, but welcoming for all residents. It became clear that these vital improvements could not be accommodated within the existing facility or in a feasible expansion of the Jones.

So we sent the staff back to the drawing board with a mandate to move from a wish list to a needs list and to establish a clear set of priorities.

When the staff and library director did so, it was apparent that we needed help figuring out how to make this slimmed-down, but still ambitious, program work in our building. To find that help we undertook an architect selection process. We invited proposals and received many, from distinguished firms.

After an extensive public vetting of those proposals we chose Finegold, Alexander Architects (FAA), one of the best architectural firms in the state with long experience working with libraries and an outstanding record of historical preservation.

We asked FAA to study whether and how to realize the program within the current building by reorganizing existing spaces and/or expanding within the existing footprint. They showed us that even if we added several stories to the library we still would not be able to do all that needed to be done. They offered alternative suggestions that accommodated the program with a modest expansion of the building.

We created a Feasibility Committee including Trustees, library staff and members of the public to work with FAA and develop a detailed plan for the Jones.

After dozens of public meetings, in January, 2017 we submitted that plan and the proposed program to the Massachusetts Board of Library Commissioners as part of an application for a state-funded library construction grant. After our proposal was carefully vetted by experts in libraries and library design, MBLC approved a $13.9 million grant and put Amherst on the waitlist for an appropriation of funds.

Between then and now the Trustees have worked with FAA to further refine the original design. We again have held numerous public meetings and considered and adopted several important suggestions from Amherst residents. We also profited from hearing about the experiences of the numerous neighboring western Massachusetts towns (including Athol, Granby, Greenfield, Holyoke, South Hadley, Hadley, and West Springfield) that have renovated and expanded their libraries.

Along the way, Amherst adopted a net zero bylaw.  While the Jones Library was exempt because the project started before the law changed, the Trustees responded to the town’s commitment to sustainability by rethinking the work that had already been done, in an effort to make the renovated and expanded library energy efficient and sustainable. We created a committee of experts and charged them to work with FAA to create a plan that would make the Jones a model of sustainability.

The design the Trustees approved achieves that goal. In addition, it will preserve the library’s historic spaces while being fully accessible to all who wish to use it. It is flexible enough to accommodate anything that needs to be done in Covid-19’s wake, and it rectifies problems that have created serious difficulties for staff and safety issues.

Most importantly, it will serve the needs of Amherst residents for decades to come.

The Trustees decided to ask the Town Council to vote on our proposal by the end of April realizing full well the fiscal challenges that Amherst now faces.

We do so now for multiple reasons, not the least because we expect to be formally awarded the MBLC grant in July, 2021 and because their rules allow towns to move forward in anticipation of state funding. Taking advantage of that funding is a once-in-a-decade opportunity.

We do so because we are convinced that we have a sound and feasible plan for financing the project, which includes a library commitment of $6,000,000 to help offset some of the town’s costs.

We do so because the serious maintenance issues and structural problems which plague the Jones
building urgently need to be addressed.

We do so because a detailed study requested by the Town Council of the cost of addressing those issues and problems by repairing the existing building showed that it would cost between $14 and $16 million, which is very close to the amount the town would have to contribute to achieve a renovated, expanded, accessible, and environmentally sustainable Jones Library.

We do so because delay risks both an escalation in costs and a further deterioration of the building.

We do so because children, teens, English language learners, immigrants, disadvantaged people, students of Amherst’s history, families, book lovers and all those who flock to the Jones deserve a facility that is as inspiring as their dreams.

But, most importantly, we do so because, in these dark and dangerous times, we do not want to put the future on hold. A renovated and expanded Jones Library will be a beacon of hope and a reminder that a great town deserves a great library.

We look forward to working closely with the Amherst Town Council as it determines when and how to consider our plan and our request.