"People of the Book" Reading Group at the Jones Library

Please join us Thursday, February 27; 7-8:30pm; in the Amherst Room of the Jones Library as Lois Dubin, Smith College, leads a discussion of The Apprenticeship of Duddy Kravitz by Mordecai Richler.

To see the list of upcoming discussion dates/titles which will be a part of this scholar-led series, please click here.

See you and Duddy Kravitz there!

Sing with your baby!!


Is it too cold to play outside? Cooped up with a kid?

The Jones Library presents SING WITH YOUR BABY, music for preschool children and their parents led by the wonderful Wendy on Tuesdays at 10:30, March 4- May 6 in the Woodbury Room. 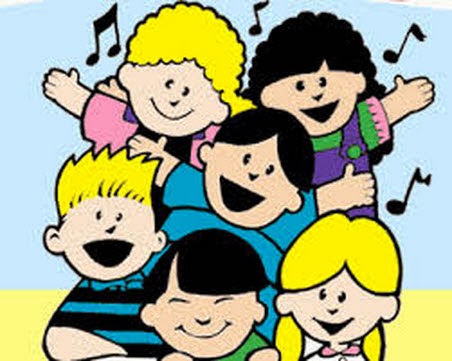 This program is funded by the Friends of the Jones Library and is free.

Tthe Berkshires and the Burghardts


This Thursday, February 27, at 7 pm in the Woodbury Room of the Jones Library, come hear about the Berkshires and the Burghardts!


Hear about some of the work being done at the homesite of W. E. B. DuBois in Great Barrington at The Jones Library in a presentation by Whitney Battle-Baptiste, Assistant Professor in the Department of Anthropology at UMass-Amherst.

The homesite is found just outside of Great Barrington, where a small house once stood. This was the house of the Black Burghardts, the maternal line of William Edward Burghardt Du Bois.  This small plot of land is where Du Bois spent his formative years, developed his love for New England, and where the Burghardt family spent almost 150 years. This presentation will discuss some of the challenges of working on a site associated with a global figure such as W. E. B. Du Bois, engaging with local and associated communities, creating an informed interpretive plan for the site that includes all sides of the story, and how the interpretation of this place impacts the larger discussion of race in New England.

Whitney Battle-Baptiste is assistant professor in the Anthropology Department at the University of Massachusetts-Amherst.  Dr. Battle-Baptiste is a historical archaeologist interested in race, gender, and cultural landscapes.  She has conducted field work at many sites, including the home of Andrew Jackson in Nashville, Tennessee; Rich Neck Plantation in Williamsburg, Virginia; and The Abiel Smith School in Boston.  Her latest research is at the W. E. B. DuBois boyhood homesite in Great Barrington.

This is the third program in this year’s Town/Gown Discussion Series by The Jones Library and the University of Massachusetts - Amherst.

P.S. Need a little background before you head over to the Jones on Thursday?  Check out this NY Times article from 1969.

Speed Dating with the Independent Scholars at the Jones

There are a lot of scholars in the area who aren't affiliated with one of the Five Colleges, doing interesting and valuable research on a wide variety of topics.  Join us for a fun evening of information and discovery in a speed dating format - each scholar will have about 10 minutes to give a short presentation about the research and work they are doing in their chosen field.

The following scholars will present briefly on their current research topics:

·         Emily Monosson, biology
Unnatural Selection: How Our Chemical World is Changing Life, and Why We Should Care
Life is far more fluid than once thought, and our actions, whether altering landscapes and climate or influencing earth's chemical environment with our industrial age chemicals, is driving evolution with unknowable consequences. When we developed antibiotics, drugs, and vaccines, we exerted evolutionary pressure on the organisms in the world, and they adapted as a result. If we want to maintain our current advantage over rapidly-evolving species like pathogens and insects or avoid becoming ill-adapted to our own environment, we must give the evolutionary process its due respect.

·         Mary Hannah Henderson, anthropology
Building Bridges: Story in Democratic Practice
My research and teaching focuses on how people enact democratic values and practices through participation in social justice movements, and particularly on the role of narrative in building agency and leadership.  Against cultural landscapes of inequity, divisive politics, and fear-mongering, what moves activists to commit to the work of social change?  How can communities building movements use story to strengthen their work?

·         Marla Harris, literature
Asperger's Syndrome and the Female Detective in International Popular Culture
I am exploring how Asperger's is treated as a shortcut to character development, as a plot device, and as a commentary on gender. But is the prevalence of the Asperger's detective on television and film an encouraging sign of societal understanding and acceptance, or merely a passing trend that in some ways  romanticizes these fictional characters, and why is there a particular fascination with women who have Asperger's?

·         Thomas Ernst, linguistics
How Humans Use Adverbs
My research, on the syntax and meaning of adverbs, is based in a view of language that maintains that all humans are born with (unconscious) innate, mental principles of how language works.  My investigations try to help illuminate these principles, by exploring why much of the way we use adverbs in sentences seems to be universal -- the same for all languages -- even though many other things vary widely from language to language.

·         Patricia Appelbaum, religious studies
Francis of Assisi in America
How did a medieval Catholic saint become an important figure in American Protestantism and popular culture? And what does it mean that he did? I’m studying the ways non-Catholics have interpreted Francis of Assisi, along with the larger question of how religious people use and relate to history.

The Jones Library presents ROLIE POLIE GUACAMOLE. Saturday February 22 at 10:30 AM in the Woodbury Room, for ages 4 to 10 and their families. 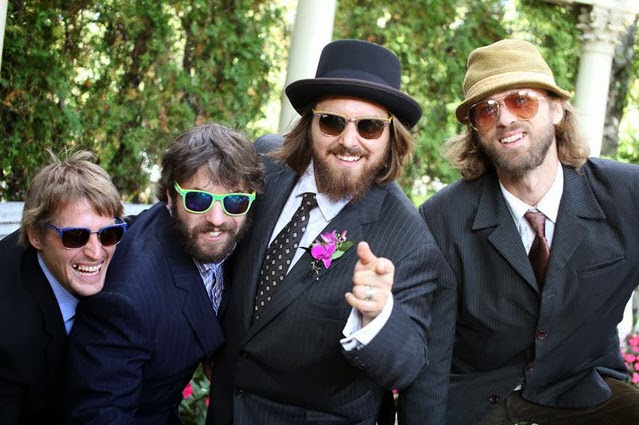 A hip “kindie” band from Brooklyn, N.Y. Their interactive shows are a mix of funk, rock, and folk music mashed into original tunes about natural living, eating healthy and staying active. Their latest album “Houses of the Moly” won a Parent’s Choice Silver Award.

Need a little music to keep you going until the concert?  Check this baby out.

This program is supported by the Friends of the Jones Library System and the Amherst Cultural Council.

Artist in Residence Louise Minks at the Jones Library


As Artist in Residence at the Jones Library in Amherst, Louise Minks of Leverett will share her touring exhibition of ten large paintings interpreting an often unknown yet major historical event in American history, the Pueblo Revolt of 1680. 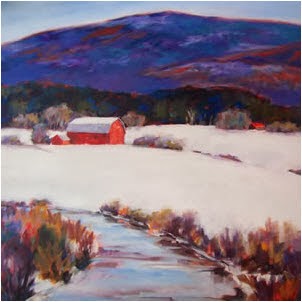 (This one isn't actually from the Pueblo Revolt of 1860.
To see those, come to the Jones!)

Check her out online and in real life at the Jones!

You can now reserve Jones Library Museum Passes from home by visiting our website!  Go to www.joneslibrary.org and click on “Museum Passes” on the left of the screen under “Your Library Online.”  All you need is your library card number!

All passes must be picked up and dropped off at the Children’s Room desk. Questions?  Call 413-259-3091 or email cookec@joneslibrary.org.

How to Reserve a Jones Library Museum Pass Online:

2.      Click on Museum Passes on the left of the screen under “Your Library Online.” Next, the blue click here to reserve a pass online button will take you to our new online system.

3.      Using the calendar on the top right of the screen, click on the day you would like to reserve the pass.

4.      If the pass is available, a red request pass button will be visible. Click on it.

5.      Enter your Library card number. If your card is in good standing, you will be able to click continue.

7.      If you would like a reminder email, you can specify when the email is sent using the pull down menu.

9.      Make sure that the information is correct, and then click submit this request.

10.  Your reservation is complete!

Perhaps you didn't get all that you'd hoped for at the holidays?  Maybe you need a mug to drink the 8 glasses of water you're supposed to drink daily? 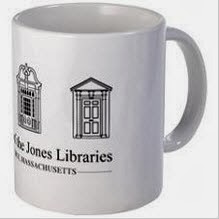 What about a tote bag to uphold your eco-friendly New Year's resolutions? 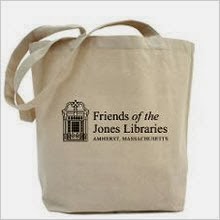 The Friends are here to help!  Swing by the Jones and check out our lovely display in the lobby.  Then toddle off to the Front Office and pick up one of everything!

Plus, the library itself has totally amazing t-shirts!  Maybe you need to get a little something for your sweetie for Valentine's Day?  The t-shirts have this guy on 'em: How can you pass all this up?  Hurry on over to the Jones!

Get your brick on! 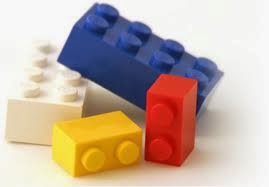 The Jones Library's Lego Club
Saturday, February 8, at 3pm in the Woodbury Room.

Word of the day? LEGENDARY
Building challenge? CREATE YOUR OWN FABLED CHARACTER OR PLACE

Where the Mountain Meets the Moon

Join us for the Jones Library’s Afterschool Bookclub! This is a book discussion group for children in grades 3-5.Thursdays, February 6th and 13th, 3:45-5 pmChildren’s Biography Room of the Jones Library
This month we will be discussing Where the Mountain Meets the Moon by Grace Lin.Stop by the Children’s Room to register for this program and pick up a copy of the book.


The Jones Library presents JOSE GONZALEZ and BANDA CRIOLLA, this Saturday February 15, at 10:30 AM in the Woodbury Room.  For people ages 4 to 10 and their families.

Come experience a Caribbean fiesta for kids including bilingual songs from the playground games of Latin children and new original songs. 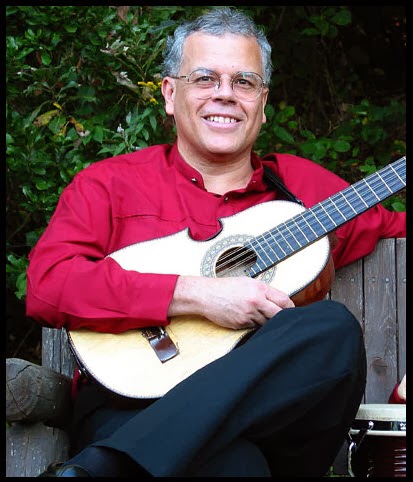 This program is supported by the Friends of the Jones Library System and the Amherst Cultural Council.

Musical instruments on loan at the Jones!


Go tinkle the ivories!  Or pound the glockenspiel!  Or hammer the dulcimer!

The Jones Library will circulate to YOU, you little Mozart, a YAMAHA PORTABLE PIANO or any of these other musical instruments: 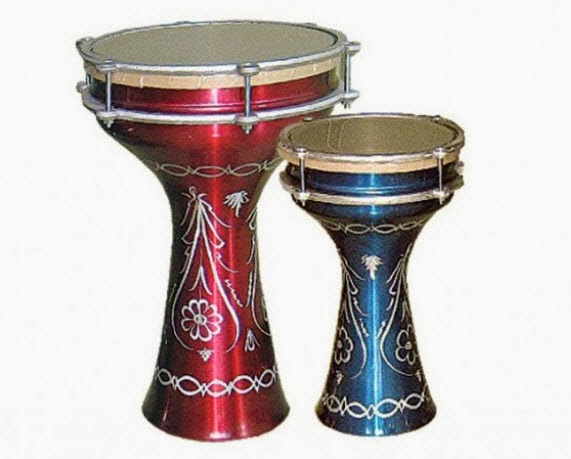