Free Poetry For The Masses! 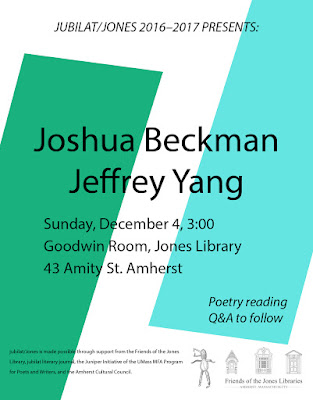 Joshua Beckman was born in New Haven, Connecticut. He is the author of nine books, including The Inside of an Apple, Take It, Shake, Your Time Has Come, and two collaborations with Matthew Rohrer: Nice Hat. Thanks. and Adventures While Preaching the Gospel of Beauty. He is an editor at Wave Books and has translated numerous works of poetry and prose, including Micrograms, by Jorge Carrera Andrade, 5 Meters of Poems (Ugly Duckling Presse, 2010) by Carlos Oquendo de Amat and Poker (Ugly Duckling Presse, 2008) by Tomaž Šalamun, which was a finalist for the PEN America Poetry in Translation Award. Most recently, he has co-edited Supplication: Selected Poems of John Wieners. He is also the recipient of numerous other awards, including a NYFA fellowship and a Pushcart Prize. He lives in Seattle and New York.
Jeffrey Yang is the author of the poetry collections Vanishing-Line and An Aquarium. He is the translator of Liu Xiaobo’s June Fourth Elegies, Su Shi’s East Slope, and Ahmatjan Osman's Uyghurland, the Farthest Exile, and the editor of Birds, Beasts, and Seas: Nature Poems from New Directions and Time of Grief: Mourning Poems. Yang works as an editor at New Directions Publishing and New York Review Books.
Posted by Lucy at 9:26 AM