The Greatest Generation: A Visual Tribute 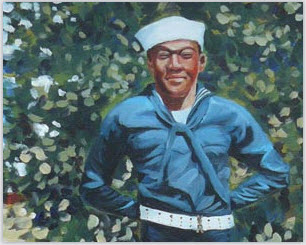 During the month of May, the Jones Library will feature an exhibit entitled “The Greatest Generation: A Visual Tribute” by artist Chris Demarest.  This display focuses on portrait tributes to those who served in World War II.

Before coming to Amherst, the exhibit was on display at the Women in Military Service to America Memorial at Arlington National Cemetery where it received rave reviews.   In May, Demarest hopes to paint several new portraits in the Jones Library atrium to honor Amherst veterans of WWII.  From Amherst, the exhibit will travel to other cities in the United States.

In conjunction with Chris Demarest’s exhibit, the Special Collections department of the Jones Library will mount several displays of WWII materials in their Exhibit Room.