How Soviet poets performed in football stadiums in front of thousands

“A poet in Russia is more than a poet,” Yevgeny Yevtushenko, a leading author of his time, famously stated. He knew what he was talking about. During Nikita Khrushchev’s cultural years of Thaw, Soviet poets were public figures like rock stars. They performed to sell-out crowds, predicted the future and helped get over the past. 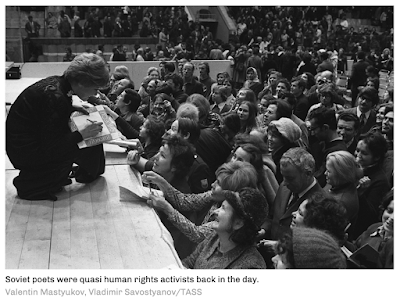 Pretty much how it used to be in the Trustees' Room at the Jones during jubilat/Jones readings.