*** Friends Recommendation of the Month *** 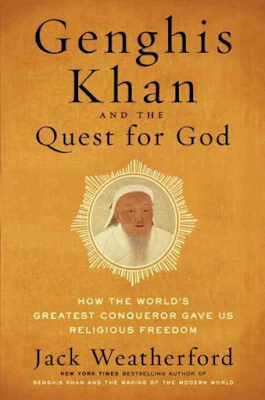 Genghis Khan and the Quest for God
by Jack Weatherford

In Genghis Khan and the Quest for God by Jack Weatherford, 2016, the author expands upon Khan's reputation as a ruthless, medieval conqueror to include his legacy as a promoter of religious freedom. How amazing to learn that Thomas Jefferson was influenced by an early 18th century biography of the Mongol warlord. Jefferson composed Virginia's first law of religious freedom in 1777, and religious tolerance and freedom were later incorporated into the United States Constitution as the First Amendment.

Genghis Khan's rise to power from a childhood of extreme deprivation to become ruler of a massive world empire is explored in depth with fascinating, counterintuitive details by Jack Weatherford.