** Friends Book Recommendation of the Month ** 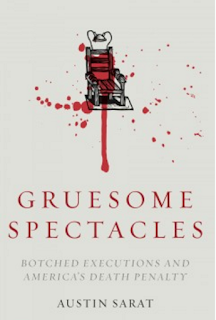 Why oppose capital punishment?  You may believe that the state should never kill anyone.   Or that, unfortunately, sometimes an innocent person is (incurably) executed.  But an important book by Amherst College professor (and Jones Library Trustees chair) Austin Sarat: GruesomeSpectacles: Botched Executions and America’s Death Penalty (2014), focuses differently.  He examines our varied modes of execution:  hanging, firing squad, electrocution, lethal injection—each touted at the time as an effective, humane advance.  Yet all of them, he shows, on occasion fail to meet the Supreme Court’s standard of executions limited to “the mere extinguishment of life,” without inflicting cruel and unusual punishment.   Every method is, Sarat shows, vulnerable to being terribly botched, resulting in “gruesome spectacles.”  Should we tinker with modes of execution, perhaps bring on the guillotine to lop off heads?   Is it time to call a halt to the death penalty?  Better read Sarat’s excellent book before deciding.